Dr. Perry Sheffield co-testified with students, Keven, Kieley, and Teresa Herrera, on the NYC City Council hearing in Resolution 509. The resolution calls on the United States Army Corps of Engineers to reconsider the proposals made in the New York-New Jersey Harbor and Tributaries Coastal Storm Risk Management Feasibility Study pursuant to the National Environmental Policy Act (NEPA) to consider sea rise in addition to storm surge. To watch the testimony click here.

Mount Sinai serves as the NYC Coordinating Center for the Network Governor Andrew Cuomo proclaimed October 11 the first Children’s Environmental Health Day in New York State. The day was a great opportunity to announce the launch of the newly established statewide network for children’s environmental health. Recognizing that exposures to toxins in the environment hurt our health and have lifelong impacts, the network was established to prevent, diagnose, and treat environmental-related health effects during pregnancy and throughout childhood.

The network will train and support health care professionals to address environmental health issues and provide clinical pediatric health services to families. Sites are located across the state, including in Albany, Buffalo, Long Island, New York City, Rochester, Syracuse, and Westchester. The Icahn School of Medicine at Mount Sinai in New York City serves as the coordinating center. On June 06, 2018, the CEHC co-sponsored the “Non-Toxic New York Advocacy Day” in Albany to urge lawmakers to make New York a leader in promoting safer products and healthy communities. In the morning, we heard from policymakers, business leaders, and advocates about ways to get toxic chemicals out of everyday products. After, we met with elected officials to promote legislation to better regulate chemicals that are in many of the products we use. Thanks to these advocacy efforts, along with the work with Clean & Healthy NY and a coalition of other organizations, the Governor has taken an important first step in requiring that manufacturers of cleaning products disclose their ingredients and identify any that are health hazards. On September 26, 2017, the New York City Council’s Committee on Health held a hearing to discuss bill INTRO. 0800-2015. This bill would ban the use of toxic pesticides and herbicides, including Monsanto’s “Roundup,” (containing the dangerous endocrine disruptor glyphosate) in all NYC City properties and parks. P30 Center Member, Dr. Evans, testified in favor of the bill. On June 13, 2017, Dr. Lauren Zajac testified in favor of the Asthma Free Homes Bill-Intro 385B. The proposed legislation prioritizes prevention measures in homes of susceptible persons –residents diagnosed with asthma, COPD, or lung cancer – and requires landlords to annually inspect and correct indoor allergen hazards, including mold, pests, and underlying symptoms that may cause these conditions, such as water leaks and pest entryways. In Dr. Zajac’s testimony she stated “As a pediatrician, I often hear from families who are frustrated about the mold and pests problems that plague their New York City apartments and are worried about how these problems may harm their children.  Both mold and pests have been linked to breathing problems, allergy symptoms, and asthma attacks. It has been shown that safe removal of these triggers from a child’s home environment can reduce asthma symptoms, and should be a important aspect of effective asthma care for all of the City’s children.” Above: Dr. Sheffield speaks in support of Intro 385B

On October 24, 2016, Dr. Perry Sheffield, P30 Center Member, spoke on behalf of the American Academy of Pediatrics at the Coalition for Asthma Free Housing Press Conference in support of the Asthma-Free Homes Act (Intro 385B). The Coalition for Asthma-Free Housing brought together NYC Council members, residents, environmental justice advocates, labor, medical experts, and legal counsel today to urge bold action on asthma and health inequality in the city through the passage of the Asthma-Free Housing Act  (Intro 385B). The proposed legislation prioritizes prevention measures in homes of susceptible persons –residents diagnosed with asthma, COPD, or lung cancer – and requires landlords to annually inspect and correct indoor allergen hazards, including mold, pests, and underlying symptoms that may cause these conditions, such as water leaks and pest entryways. Dr. Sheffield emphasized the importance of this legislation for the most vulnerable, low-income children “We are doctors from the American Academy of Pediatrics that take care of children with asthma.  Apartments or any home with lots of asthma triggers can mean more trips to the ER, more time in the hospital, and in some cases even death for those children. The Asthma Free Housing Act will support them in helping keep their children safe and healthy.  That’s something from which we can all benefit.”

On January 14, 2016, the NYC Council Committee on Consumer Affairs hosted a hearing on Intro No. 803-A, which would amend the administrative code of NYC to regulate the manufacturing and selling of children’s products that contain toxic chemicals. The effort to establish lower total content levels of regulated chemicals is shared by many proponents of children’s environmental health who attended the hearing, and was supported with expert testimony by COEC Co-Director Dr. Maida Galvez, an environmental pediatrician at the Icahn School of Medicine at Mount Sinai. Many products intended for children’s use, including food/drink utensils and containers, clothing, and accessories, are not categorized as ‘toys,’ and are therefore excluded from current regulatory measures to reduce exposure to chemicals like lead, cobalt, arsenic, and other heavy metals. On December 17, 2015, P30 COEC Co-Director Dr. Maida Galvez represented Mount Sinai at a press conference to support the Child Safe Products Act. Research conducted by Children’s Environmental Health Center researchers along with others at Mount Sinai has advanced our understanding of the role played by low dose chemical exposures in children’s growth and development, including chemicals such as arsenic, cadmium, and lead. WE ACT for Environmental Justice, Center for Environmental Health, Clean and Healthy New York, Council-member Mark Levine, and several community members were present at the press conference to express support for this legislation. On September 16, 2015, the Icahn School of Medicine at Mount Sinai hosted a delegation of Indian municipal and state-level officials, as well as disaster management, weather service and health professionals for a panel on health care facility emergency preparation and discussion. This event was led by Dr. Perry Sheffield, who has been working through Mount Sinai Global Health in the development of Southeast Asia’s first extreme heat event plan in Ahmedabad, Gujarat, India (http://www.mdpi.com/1660-4601/11/4/3473). Mount Sinai has partnered with the Natural Resources Defense Council and Public Health Foundation of India-Indian Institute of Public Health on this initiative, which has gained international attention and is expanding nationally in India. On September 1, 2015, the New York State network of Centers of Excellence in Children’s Environmental Health (nyscheck.org) met with Dr. Howard A. Zucker, NYS Commissioner of Health, and Dr. Nathan Graber, Director of the Center for Environmental Health at the NY State Department of Health, to share highlights from across the network. Members in attendance included Drs. Ruth Lawrence and Richard Miller from the University of Rochester, Dr. Robert Amler from NYMC, Drs. Maida Galvez and Philip Landrigan from Mount Sinai, Dr. Anika Clarke, a pediatric resident from Elmhurst Hospital, Dr. Cappy Collins from Stony Brook, Saima Anjam from EANY, and Karen Miller from HBCAC. That evening, Dr. Landrigan appeared on an episode of Capital Talk to discuss the state’s important role in protecting children’s environmental health. In addition, he was interviewed by Susan Arbetter on an episode of the Capitol Pressroom, during which he explained his stance on GMO food labeling and discussed state funding for Centers of Environmental Health. 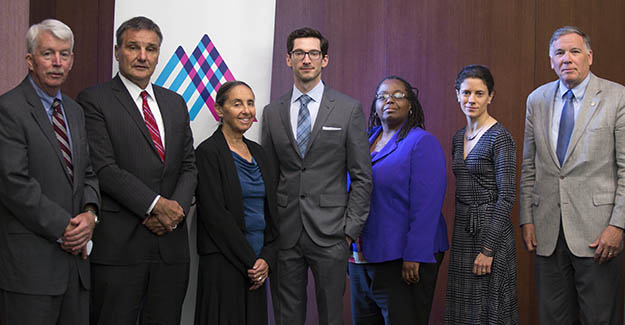 This summer, Mount Sinai Hospital hosted the US launch of the report by the Lancet Commission on Health and Climate called “2015 Lancet Commission on Health and Climate Change: Policy Responses to Protect Public Health”. During the panel, several leading health professionals discussed key findings of the report and the medical need for urgent action on climate change. PEHSU pediatrician Dr. Perry Sheffield was among the distinguished panelists, with opening remarks by Dr. Philip Landrigan. To read more about the report, please click here. Drs. Lauren Zajac and Thomas Hays from the Children’s Environmental Health Center (CEHC) at Mount Sinai testified at a City Council hearing on June 25, 2015 in favor of City Council Bill Intro 420. The proposed bill would limit ambient classroom noise to 45 dBA when construction sites are located within 75 feet of a school. In their testimony, Drs. Zajac and Hays highlighted important health repercussions of prolonged exposure to elevated noise levels in children, and the adverse effects of noise pollution on learning, memory, and academic performance. Under the provisions in the new bill, noise mitigation would be the responsibility of developers and would be regulated and enforced by the Department of Environmental Protection.